It can grow to more than 50 m (165 feet) in virgin cove forests of the Appalachian Mountains, often with no limbs until it reaches 25-30 m (80-100 feet) in height, making it a very valuable timber tree. It is fast-growing, without the common problems of weak wood strength and short lifespan often seen in fast-growing species. April marks the start of the flowering period in the southern USA ; trees at the northern limit of cultivation begin to flower in June. The flowers are pale green or yellow, with an orange band on the tepals; they yield large quantities of nectar.

The American tulip tree is the state tree of Indiana, Kentucky and Tennessee. All young tulip trees and most mature specimens are intolerant of prolonged inundation; however, a coastal plain swamp ecotype in the southeastern United States relatively flood-tolerant. This ecotype is recognized by its blunt-lobed leaves, which may have a red tint. Parts of east-central Florida near Orlando have an ecotype with similar-looking leaves which flowers much earlier than other types. This east central Florida ecotype seems to have the best ability to tolerate very wet conditions, where it may grow short pencil-like root structures similar to those produced by other swamp trees in warm climates. Some individuals retain their leaves all year unless a hard frost strikes.

The leaves are of unusual shape and develop in a most peculiar and characteristic manner. The leaf-buds are composed of scales as is usual, and these scales grow with the growing shoot. In this respect the buds do not differ from those of many other trees, but what is peculiar is that each pair of scales develops so as to form an oval envelope which contains the young leaf and protects it against changing temperatures until it is strong enough to sustain them without injury. When it has reached that stage the bracts separate, the tiny leaf comes out carefully folded along the line of the midrib, opens as it matures, and until it becomes full grown the bracts do duty as stipules, becoming an inch or more in length before they fall. The leaf is unique in shape, its apex is cut off at the end in a way peculiarly its own, the petioles are long, angled, and so poised that the leaves flutter independently, and their glossy surfaces so catch and toss the light that the effect of the foliage as a whole is much brighter than it otherwise would be.

The tree grows readily from seeds, which should be sown in a fine soft mould, and in a cool and shady situation. If sown in autumn they come up the succeeding spring, but if sown in spring they often remain a year in the ground. Loudon says that seeds from the highest branches of old trees are most likely to germinate. It is readily propagated from cuttings and easily transplanted.

Tulip trees make magnificently-shaped specimen trees, but are very large, growing to about 35 m in good soil. They grow best in deep well-drained loam which has thick dark topsoil. They show stronger response to fertilizer compounds (those with low salt index are preferred) than most other trees, but soil structure and organic matter content are more important. The southeastern coastal plain and east central Florida ecotypes occur in wet but not stagnant soils which are high in organic matter. All tulip trees are unreliable in clay flats which are subject to ponding and flooding. Like other members of the Magnolia family, they have fleshy roots that are easily broken if handled roughly.

Transplanting should be done in early spring, before leaf-out; this timing is especially important in the more northern areas. Fall planting is often successful in Florida. The east central Florida ecotype may be more easily moved than other strains because its roots grow over nine or ten months every year -- several months longer than other ecotypes. Most tulip trees have low tolerance of drought, although Florida natives (especially the east central ecotype) fare better than southeastern coastal plain or northern inland specimens. 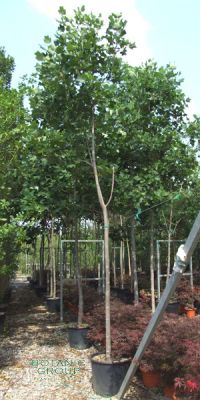 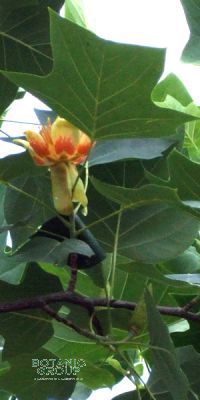 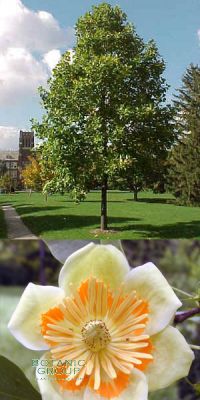