Thuja orientalis Pyramidalis Aurea - Platycladus is a distinct genus of evergreen coniferous tree in the cypress family Cupressaceae, containing only one species, Platycladus orientalis, also known as Chinese Arborvitae or Biota. It is native to northwestern China and widely naturalised elsewhere in Asia east to Korea and Japan, south to northern India, and west to northern Iran.

Although generally accepted as only member of its genus, it has been suggested that the closely related species Microbiota decussata could be included in Platycladus, but this is not widely followed. Other fairly close relatives are the genera Juniperus and Cupressus, both of these genera being graft-compatible with Platycladus. In older texts, Platycladus was often included in Thuja, but it is only distantly related to that genus. Differences from Thuja include its distinct cones, wingless seeds, and its almost scentless foliage.

foliage and conesIt is a small, slow-growing tree, to 15-20 m tall and 0.5 m trunk diameter (exceptionally to 30 m tall and 2 m diameter in very old trees). The foliage forms in flat sprays with scale-like leaves 2-4 mm long. The cones are 15-25 mm long, green ripening brown in about 8 months from pollination, and have 6-12 thick scales arranged in opposite pairs. The seeds are 4-6 mm long, with no wing.

The common name 'arborvitae' is from Latin, 'tree of life', and is based on its association with long life and vitality in Buddhist thought in China. This is probably based on the tree's unchanging evergreen nature in the cold dry climate of northwest China, and its longevity; some of the larger specimens planted around Buddhist temples in China are said to be in excess of 1,000 years old.

It is very widely used as an ornamental tree, both in its homeland, where it is associated with long life and vitality, and very widely elsewhere in temperate climates. The wood is used in Buddhist temples, both for construction work, and chipped, for incense burning. 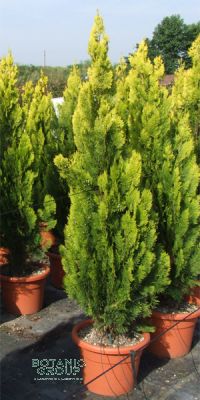 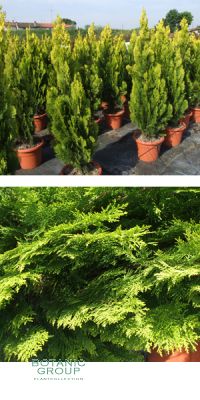