The Mediterranean Cypress is a medium-sized evergreen tree to 35 m tall, with a conic crown with level branches and variably pendulous branchlets (but see also below under 'Uses' for the differing cultivated variants). It is very long-lived, with some trees reported to be over 1,000 years old.

Mediterranean Cypress has been widely cultivated as an ornamental tree for millennia away from its native range, mainly throughout the central and western Mediterranean region, and in other areas with similar hot, dry summers and mild, rainy winters, including California, southwest South Africa and southern Australia). It can also be grown successfully in areas with cooler, moister summers, such as the British Isles, New Zealand and the Pacific Northwest. 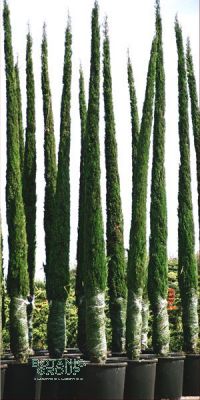