Bottlebrush or Callistemon is a genus with 34 species of shrubs in the family Myrtaceae. The majority of Callistemon species are endemic to Australia; four species are also found in New Caledonia. They are commonly referred to as bottlebrushes because of their cylindrical, brush like flowers resembling a traditional bottle brush. They are found in the more temperate regions of Australia, mostly along the east coast and south-west, and typically favour moist conditions so when planted in gardens thrive on regular watering. However, at least some of the species are drought-resistant.

Callistemons can be propagated either by cuttings (some species more easily than others), or from the rounded seeds. Flowering is normally in Spring and early Summer (October-December), but conditions may cause flowering at other times of the year. The obvious parts of the flower masses are stamens, with the pollen at the tip of the filament; the petals are inconspicuous (see picture). Flower heads vary in colour with species; most are red, but some are yellow, green, orange or white. Each flower head produces a profusion of triple-celled seed capsules around a stem (see picture) which remain on the plant with the seeds enclosed until stimulated to open when the plant dies or fire causes the release of the seeds. (A few species release the seeds annually.) They are relatively slow growing though in time the larger species can grow up to 15 metres. Some are ground-hugging, and grow to only 0.5 metre. The leaves are linear to lanceolate and are not shed in the winter. The spiked ends can cause skin scratches when brushed past. They have been grown in Europe since a specimen of Callistemon citrinus was introduced to Kew Gardens in London by Joseph Banks in 1789. In Australia, Callistemon species are sometimes used as food plants by the larvae of hepialid moths of the genus Aenetus including A. ligniveren. These burrow horizontally into the trunk then vertically down. 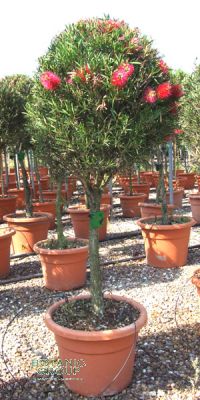