Mulberry (Morus) is a genus of 10–16 species of deciduous trees native to warm temperate and subtropical regions of Asia, Africa and North America, with the majority of the species native to Asia.

The closely related genus Broussonetia is also commonly known as mulberry, notably the Paper Mulberry Broussonetia papyrifera. Mulberries are fast-growing when young, but soon become slow-growing and rarely exceed 10-15 m tall. The leaves are alternately arranged, simple, often lobed, more often lobed on juvenile shoots than on mature trees, and serrated on the margin. The fruit is a multiple fruit, 2-3 cm long. Mulberries begin as white to pale yellow with pink edges. They are red when ripening. A fully ripened mulberry is dark purple to black, edible, and sweet with a good flavor in several species.

The ripe fruit is edible and is widely used in pies, tarts, wines and cordials. The fruit of the Black Mulberry, native to southwest Asia, and the Red Mulberry, native to eastern North America, have the strongest flavour. The fruit of the White Mulberry, an east Asian species which is extensively naturalised in urban regions of eastern North America has a different flavour, sometimes characterised as insipid.

The mature fruit contains significant amounts of resveratrol. It is known, though, that unripe fruit and green parts of the plant have a white sap that is intoxicating and mildly hallucinogenic.[citation needed] Black, red and white Mulberry are widespread in Northern India and Pakistan and Iran, where the tree and the fruit are known by the Persian-derived names Toot (Mulberry) or Shahtoot (King's or "Superior" Mulberry). Jams and sherbets are often made from the fruit in this region. Mulberry leaves, particularly those of the White Mulberry, are also ecologically important as the sole food source of the silkworm, the pupa/cocoon of which is used to make silk.

Other Lepidoptera larvae also sometimes feed on the plant including Common Emerald, Lime Hawk-moth and The Sycamore. Mulberries can be grown from seed, and this is often advised as seedling-grown trees are generally of better shape and health. However, they are most often planted from large cuttings, which take root readily. 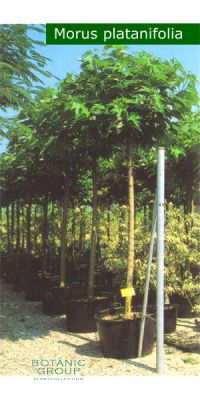