Zamioculcas is a genus of flowering plant in the family Araceae, containing the single species Zamioculcas zamiifolia. It is a tropical perennial plant native to eastern Africa, from Kenya south to northeastern South Africa.

The botanical name derives from the superficial similarity of its foliage to that of the cycad genus Zamia. Botanical synonyms include Caladium zamiaefolium, Zamioculcas loddigesii and Z. lanceolata. It has no established common name, but is sometimes known by the trivial names "ZZ plant", "aroid palm", "fat boy", and "eternity plant". It is a herbaceous plant growing to 45-60 cm tall, from a stout underground, succulent rhizome. It is normally evergreen, but becomes deciduous during drought, surviving drought due to the large potato-like rhizome that stores water until rainfall resumes. The leaves are pinnate, 40-60 cm long, with 6-8 pairs of leaflets 7-15 cm long; they are smooth, shiny, and dark green. The flowers are produced in a small bright yellow to brown or bronze spadix 5-7 cm long, partly hidden among the leaf bases; flowering is from mid summer to early autumn. All parts of the plant are poisonous if ingested.

Zamioculcas is grown as an ornamental plant, mainly for its attractive glossy foliage. It can be kept outdoors as long as the temperature does not fall below around 15 °C (59°F); best growth is between 18 °C to 26 °C (64.4° - 78.8 °F). Hot temperatures give an increase of leaf production. In temperate regions, it is grown as a houseplant. Over watering may destroy this plant; erring on the side of dryness is preferable to risking tuber rot. Do not use leaf shiners. A quarter or eighth strength liquid fertilizer such as fish emulsion or worm-cast liquid may be used once a month at the warmest period for potted specimens. Bright, non-direct light is best for Zamioculcas, although it will tolerate very low light. Some sun will be tolerated, very early in the morning for hot districts - morning or afternoon for cooler districts. 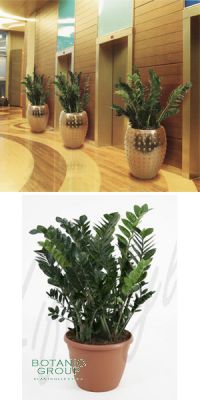 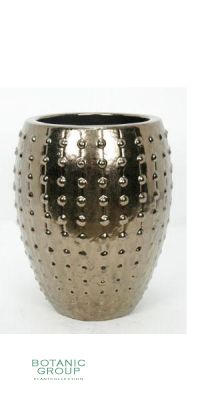 Details
Shipping time: 6-9 days
You do not have the permission to see the prices

Ficus microcarpa in a Planter