Albizia julibrissin is a small deciduous tree growing to 5–12 m tall, with a broad crown of level or arching branches. The bark is dark greenish grey in colour and striped vertically as it gets older. The leaves are tripinnate, 20–45 cm long and 12–25 cm broad, divided into 6–12 pairs of pinnae, each with 20–30 pairs of leaflets; the leaflets are oblong, 1–1.5 cm long and 2–4 mm broad. The flowers are produced throughout the summer in dense inflorescences, the individual flowers with no petals but a tight cluster of stamens 2–3 cm long, white or pink with a white base, looking like silky threads. The fruit is a flat brown pod 10–20 cm long and 2–2.5 cm broad, containing several seeds inside.

Persian Silk Tree is widely planted as an ornamental plant, grown for the leaf texture and flowers. The broad crown of a mature tree makes it useful for providing dappled shade. In the wild, the tree tends to grow in dry plains, sandy valleys, and uplands. It has become an invasive species in Japan and the United States, in the latter widely spread from Long Island, New York west to Missouri and Illinois and south to Florida and Texas; it is also cultivated in California and Oregon but is not invasive there. Breeding work is currently under way in the United States to produce ornamental plants which will not set seed and can therefore be planted without risk. However, in the eastern United States it is generally a short-lived tree as this species is highly susceptible to mimosa vascular wilt, a fungal disease caused by a species of Fusarium. (Ironically, this disease does not seem to have seriously impacted its populations.) Because of its invasive tendencies and disease susceptibility, it is rarely recommended as an ornamental plant in the US, though it is still widely planted in parts of Europe. The flower colour of Albizia julibrissin varies from white, in A. julibrissin f. alba, to rich red-tipped flowers; cream- or pale yellow-flowered variants are also reported. Seedlings vary: those with darker pink flowers than the normal A. julibrissin are classed as A. julibrissin f. rosea, but some may be paler than others; the selected cultivar A. julibrissin 'Ernest Wilson' (also known as 'E.H.Wilson' or 'Rosea') is a cold-tolerant tree with deep pink flower colour. Other cultivars are becoming available: A. julibrissin 'Summer Chocolate' has red foliage ageing to dark bronze, with pale pink flowers; A. julibrissin 'Ishii Weeping' (or 'Pendula') has a drooping growth habit. In Japan, Albizia julibrissin f. rosea is often used for non-traditional bonsai. The bark or cortex is used to cure bruises and as a vermicide. The seeds are used as a food for livestock and wildlife, and the sweetly-scented flowers are a good nectar source for honeybees. 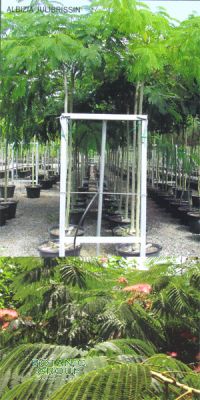 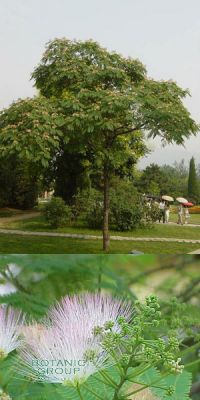 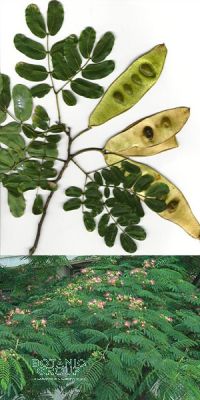