The Weeping Fig or Benjamin's Fig (Ficus benjamina, Ficus benjamini) is a species of fig tree, native to south and southeast Asia south to northern Australia. It is the official tree of Bangkok, Thailand. It is a tree reaching 30 m tall in natural conditions, with gracefully drooping branchlets and glossy leaves 6-13 cm long, oval with an acuminate tip.

In tropical latitudes, the Weeping Fig makes a very large and stately tree for parks and other urban situations, such as wide roads. It is often cultivated for this purpose.

It is a very popular house plant in temperate areas, due to its elegant growth and tolerance of poor growing conditions; it does best under bright, sunny conditions but will also tolerate considerable shade. It requires a moderate amount of watering in summer, and only enough to keep it from drying out in the winter. It does not need to be misted. The plant is sensitive to cold and should be protected from strong drafts. When grown indoors, it can grow too large for its situation, and may need drastic pruning or replacing.

The leaves are very sensitive to small changes in light. When it is re-located it reacts by dropping many of its leaves and replacing them with new leaves adapted to the new light intensity.[citation needed]

There are numerous cultivars available (e.g. 'Danielle', 'Naomi', 'Exotica', and 'Golden King'). Some cultivars include different patterns of colouration on the leaves, ranging from light green to dark green, and various forms of white variegation.

This plant, along with the banyan, are the most commonly used for "indoor" bonsai. This is due to their tolerance of the common household environment. 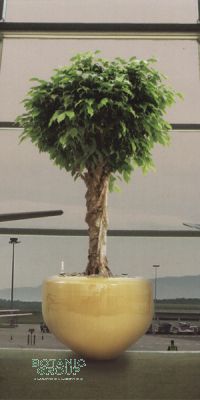 Ficus benjamina in a Planter

Buxus sempervirens in a Planter

Chamaerops humilis in a Ceramic Planter